When it comes to creating a great website, there are many things to consider. From overall design, content, usability, and searchability, to development framework, responsiveness, integration with third party providers, and selecting the right hosting solution for your site––all of the above are important in making sure your website is optimized for success but the most important aspect is always performance.

Even the smallest change in the web page weight or load time will impact the traffic noticeably.

Web performance refers to the speed in which web pages are downloaded and displayed in the user’s browser. Numerous reports published over the years have agreed on a central point: Users are extremely sensitive to web performance and even the smallest change in the web page weight or load time will impact the traffic noticeably.

Today’s web users expect fast and reliable online user experiences from every website. Faster website load speeds have been shown to increase visitor retention and loyalty and user satisfaction, especially for users with slow internet connections and those on mobile devices.

Performance also sits at the foundation of good UX, or user experience. As your site begins to load, there’s a period of time where users are waiting for content to appear. Until this happens, there’s no user experience to speak of. The lack of content is especially noticeable on mobile devices that are using slower connections (i.e., 3G, 4G, LTE). This explains the higher bounce rates on phones and tablets versus desktop. The problem is especially worse for poorly implemented or slow websites, as mobile traffic surpasses desktop traffic.

So, how do we measure performance?

There are a number of ways to measure performance. At aequilibrium, we use RAIL. RAIL, which stands for Response, Animation, Idle, Load, is a user-centric performance model that breaks down the user’s experience into key actions and provides a set of goals and guidelines for developers and designers to follow in order to ensure good user experience for each of these actions.

The 4 parts of the RAIL performance model by Google.

RAIL is heavily focused on the user and on how users perceive performance delays. The user perception differs based on the network conditions and the device used. Users are expecting much faster loading experiences of under 1000ms on desktop machines, but show more patience when it comes to mobile devices over slow 3G connections.

Here are the main goals that RAIL proposes for each action type:

This standard aims to reduce the waiting time between input and response to a bare minimum and keeps the action-reaction connection alive.

Here, the aim is for visual smoothness, as users are good at noticing when frame rates vary. This standard should be applied to all types of animations, including visual animations such as loading indicators, scrolling, dragging, panning, or pinching.

Idle time should be used to complete deferred work. The general rule of thumb is to load as little data as possible with the initial page load and then use the idle time to load the rest.

While RAIL has emerged as the most used model for measuring performance, there are alternative models on the market. Another model that is receiving support from the web community is PRPL, which stands for Push, Render, Pre-cache, Lazy-load. This pattern was created by the Polymer team and unveiled at Google I/O 2016. PRPL was designed specifically to deliver mobile web experiences more quickly and is considered to be more of a mindset and long-term vision for improving the performance of mobile web. Depending on the product we’re looking to measure performance on at aequilibrium, PRPL could be used in lieu of RAIL. Both have their strong points, so it really depends on the client and situation.

But still, how do you actually measure web performance?

The Performance panel under Chrome DevTools is the main resource for analyzing the runtime performance of web applications to find bottlenecks. It can be used to measure things such as where your application code spends most of its time. The information can then be used to further optimize the problematic areas that impact performance to reduce UI blocking and optimize UI responsiveness. 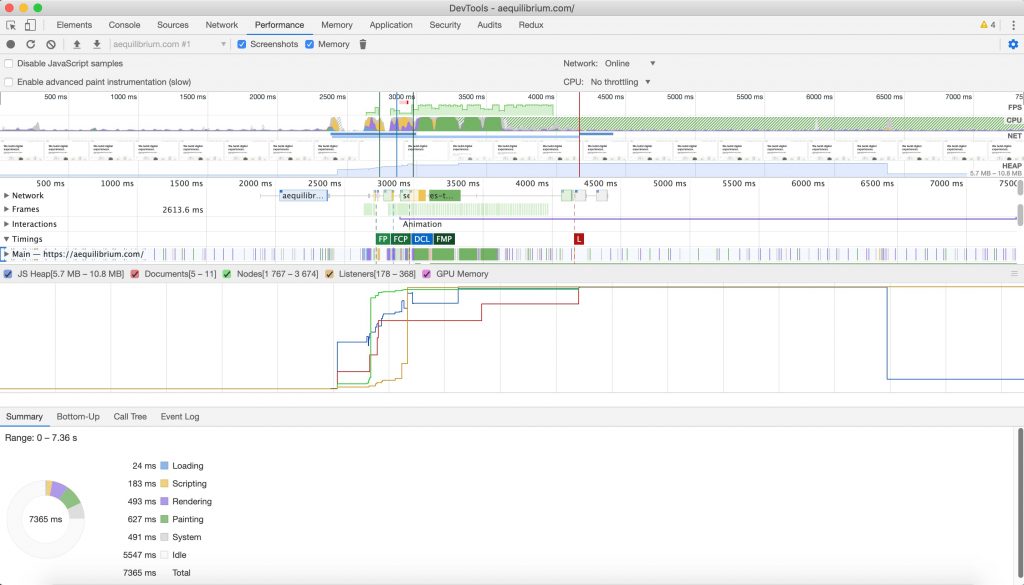 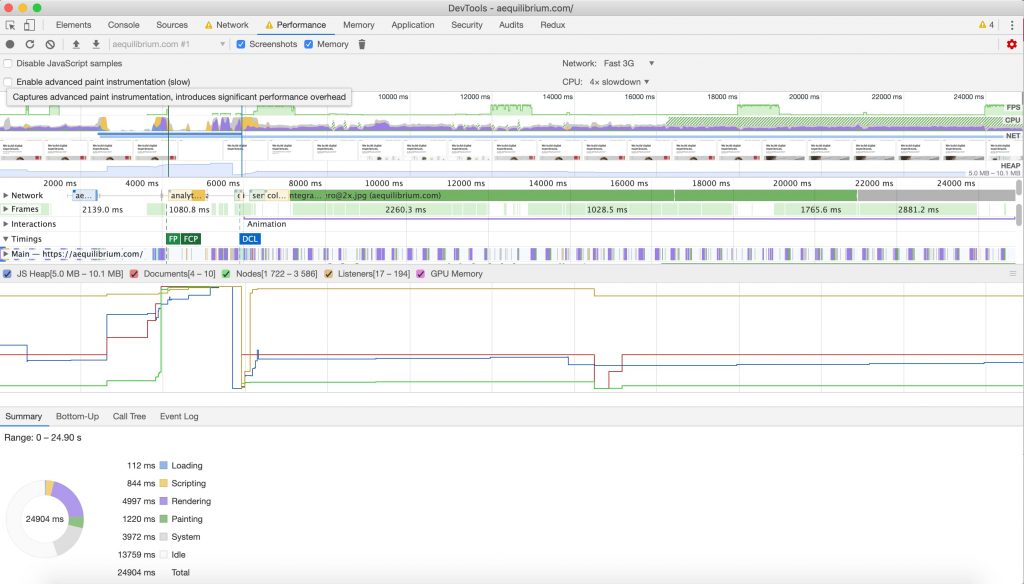 Performance profiling to simulate conditions for mobile devices for aequilibrium.com.

You can also see a breakdown of the activities in the Summary tab, which gives great insight into which activities have taken the most time to complete. Keeping in mind that one of RAIL’s goals is to maximize the idle time, you’ll have a good indication of whether or not you’re on the right track if page time is down.

Lighthouse is an automated tool that runs a series of audits for performance, accessibility, best practices, Progressive Web Apps, and SEO. You can run Lighthouse from Chrome DevTools (Audits panel), from the command line, or as a Node module.

Lighthouse requires a URL to start the audit. After it’s done, it will generate a report in which it scores each component from 0 to 100, where 0 is the lowest possible score and 100 is the best possible one. The report also contains a list of suggested improvements for the failing audits, together with some pointers on how to fix the issues.

The performance score is color-coded and ranges from:

If you manage to score in the green interval, you have a top-performing site and are part of the 98th percentile. 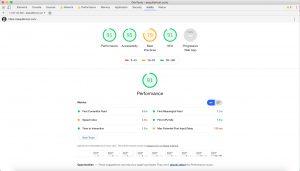 No matter how you choose to run Lighthouse, you have the option to change some of its configurations and customize the audits to simulate mobile devices running under throttled network conditions. 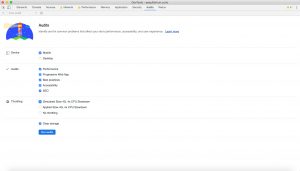 WebPageTest is another online performance tool that uses real browsers and real mobile network connection speeds from multiple locations around the world. The main benefit, compared with the other two tools, is the real “condition” under which the performance tests are being done. Reports generated are detailed and augmented with screenshots and videos taken during the test execution. 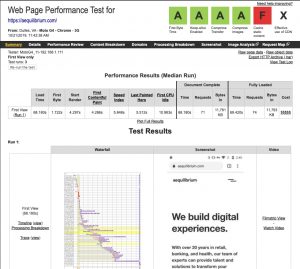 How you can get started.

A good starting point would be to think about the resources you send to your users. For example, if you’ve used a CSS framework to build your UI, such as Bootstrap or Foundation, ask yourself if the framework is really needed. Because CSS is a render-blocking resource, the overhead of a CSS framework could delay rendering and slowdown load time significantly. Similarly, Javascript libraries are convenient but not always necessary. By being mindful of which libraries you are using and considering leaner alternatives like Zepto or Preact, you can improve your website’s performance.

Next, you need to think about how you send resources to your users. If you haven’t already, migrate to HTTP/2. HTTP/2 addresses many performance issues in HTTP/1, including concurrent request limits and the lack of header compression. rel=”preload” for early fetches of critical resources and rel=”preconnect” for early connections are two resource hints you can consider. Making use of resource hints can have a pronounced positive effort on page rendering and lowering the time to interact.

After you have figured out how to send resources, consider how much data you are actually sending. Limiting the amount of data sent to your users can significantly boost web performance. Here are some tips from caniuse.com (note that not all of these techniques are supported across all browsers, especially older versions):

We spoke about how to improve web performance, but we also need to acknowledge the most common mistakes that organizations do when it comes to web performance.

First and foremost, performance needs to be thought about at the beginning of a product’s lifecycle, not at the end. In many situations, we only raise the performance requirements after the website has already been built, making it harder to address some of the issues found at the core of the performance degradation.

As developers, we seem to forget that we are making websites for the user and not for our own convenience. The “convenience” of frameworks is why web pages are getting larger and larger and should not be forgotten.

Performance is a team responsibility. By neglecting a culture of performance and instead assigning one or two individuals to deal with the performance requirements, web performance becomes neglected, as well.

Lastly, some companies fail to run basic web performance checks altogether. There are a plethora of freely available web performance tools that can be used to monitor and control the performance over time, making it easy to check this one of your company’s checklist.

Think about performance as a barrier that prevents entire groups of users from accessing your website content. Poor performance can lead to exclusion. Sites that use an excess of resources, whether on the network or on the device, don’t just create slow experiences, but they end up leaving many user groups out.

There can be real consequences to the way we build, felt by real people around the world. As companies tend towards prioritizing new features over improving performance, accessibility, or security, it’s important for us, as developers, to raise awareness and advocate for the importance of good performance across the web. Remember, even the smallest changes in page weight or load time will impact the traffic noticeably and a difference.